Residents Warned Against Drinking, Preparing Food with Their Water

The Navy has delivered bottled water and warnings to the first of what may be many homes with contaminated drinking water that are located in the area of the Navy’s Outlying Field (OLF) near Coupeville.

At least two property owners, some of the first who took the Navy up on its offer to have their water wells tested, were notified by phone that their water contained toxic chemicals above EPA Health Advisory Levels.

The Town of Coupeville had its two water supply wells independently tested for three of the six chemicals that were found beneath the OLF. The Town’s well field located closest to the OLF was found contaminated with Perfluorooctanoic Acid (PFOA) a level close to, but not above the EPA’s Health Advisory Level. The other two chemicals, PFOS and PFBS, were not detected at the levels they were tested for.

Perfluorooctanoic Acid (PFOA) has been linked to kidney and testicular cancers, birth defects, damage to the immune system, heart and thyroid disease, and complications during pregnancy. EPA’s Science Advisory Board labeled it a likely human carcinogen. Although the Navy describes the amounts found as “trace”, PFOA is hazardous in tiny doses because it accumulates in the body and takes years to excrete.

Last week, one of what may end up being many families was told by the Navy that PFOA was found in their drinking water at more than six times the EPA’s Health Advisory Level.

A neighbor’s well was also found to be contaminated and the family warned against using their water for drinking or cooking. With the Navy’s phone call came the realization that family members had been drinking a likely human carcinogen known to accumulate in the body, and have been doing so for an unknown period of time.

The Navy isn’t saying how many of the privately owned wells have shown contamination thus far. However, the distance from the OLF to the private wells showing contamination, suggests that closer wells may also be contaminated.

The Navy notifies well owners by phone and then delivers bottled water to their homes if the levels of contamination are above the EPA’s Health Advisory Levels. The Navy says it will do nothing if contaminates are found below those levels. Well owners whose water has been tested by the Navy have yet to received complete copies of the laboratory reports.

“The Navy’s approach to this pollution problem is no different than that of any big industrial polluter seeking to avoid criticism, reduce liability, and continue business-as-usual,” said Rick Abraham, an environmental consultant working with Citizens of Ebey’s Reserve (COER). “They downplay the seriousness of the problem, drag out investigations, and keep the public in the dark,” he said.

Abraham was previously involved in PFOA investigations on behalf of industrial workers and communities in at least five states.

The Navy’s Aqueous Film Forming Foam (AFFF) containing PFOA and/or PFOS is the suspected source of the contamination. The United States, Canada, European Union, Australia, and Japan have banned new production of this fire fighting foam. However, the Navy has stockpiled large amounts for use in fighting fires until it finds a satisfactory substitute. The fire trucks sitting at the OLF and main base in Oak Harbor still have PFOA and PFOS containing AFFF.

The Navy has refused to identify the AFFF brands or formulations to be used in event of an accident, and will only say that they don’t contain “as much” of the dangerous chemicals as they once did.

According to the Navy, historical crash sites and fire training areas are the most likely sources of PFAS contamination at its installations. However, the Navy has yet to investigate the site of a 1982 crash site at the OLF. It claims to be unsure of the crash location and that investigating the site is not a priority.

COER is aware of at least one resident who witnessed the crash and the firefighting trucks at the scene of the still burning jet. The site was not considered in the Navy’s investigation plans.

The Navy claims to have no record of AFFF being used at the OLF, even though a resident recalls seeing the spreading foam on the OLF runway and the washing of fire trucks at OLF after fire fighting training. The Navy has held two large public informational meetings but has made no effort to seek such information from area residents.

The Navy has also kept its plans for investigating contamination at the OLF from the public. The Navy’s “draft” Sampling and Analysis Plan (SAP) was provided to the EPA and Island County Public Health. All have refused to make the plan public, claiming that “draft” status of plan exempts it from open records laws.

“The people most at risk have been kept in the dark and denied meaningful input,” said Abraham. “The Navy’s failure to consider the potential sources of the contamination raises questions about the adequacy of the investigation,” he added.

“The last thing the Navy wants to do is draw attention to an accident that highlights the risks posed by thousands of touch-and-go ‘Growler’ jet training operations at the OLF,” said Maryon Atwood, a COER board member whose home is near the OLF.

The Navy just released a Draft Environmental Impact Statement wherein it seeks to increase touch-and-go operations Growler jet operations at the OLF up to 35,000 a year, almost a six-fold increase over current levels. “Increasing operations will increase the risk of accidents and the threat to our drinking water,” said Atwood. “This is in addition to increasing noise levels that already exceed community guidelines established by the EPA, OSHA, the State of Washington and the World Health Organization,” she added.

If private and public wells are shown to contain PFOA or PFOS above the EPA’s Health Advisory Level of 70 parts per trillion, either individually or combined, the Navy says it will provide alternative water. According to a number of health experts, the levels deemed to be acceptable by the EPA are set far too high and not adequately protective.

Navy and Air Force sites around the country have been identified as sources of PFAS contamination with the cost of remediation and providing alternate water running into the tens of millions of dollars.

COER is sponsoring a public meeting to discuss the contamination at OLF on Thursday, December 15 from 6:30 to 8:00 PM at the Pacific Rim Institute for Environmental Stewardship, 180 Parker Road, in Coupeville.

How to Respond to the Navy DEIS
HERE’S WHAT YOU CAN DO to help fight the Navy DEIS – comment period ends Feb. 24 2017!

Say No to War Games in the Park 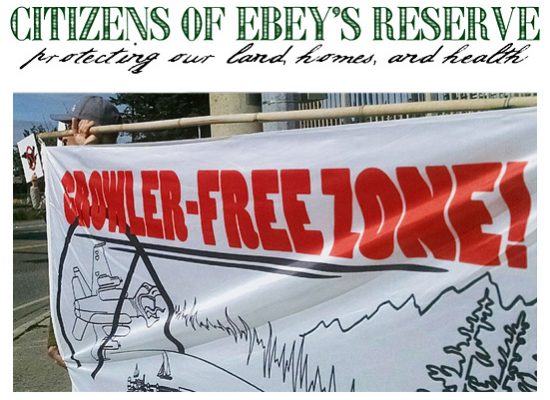