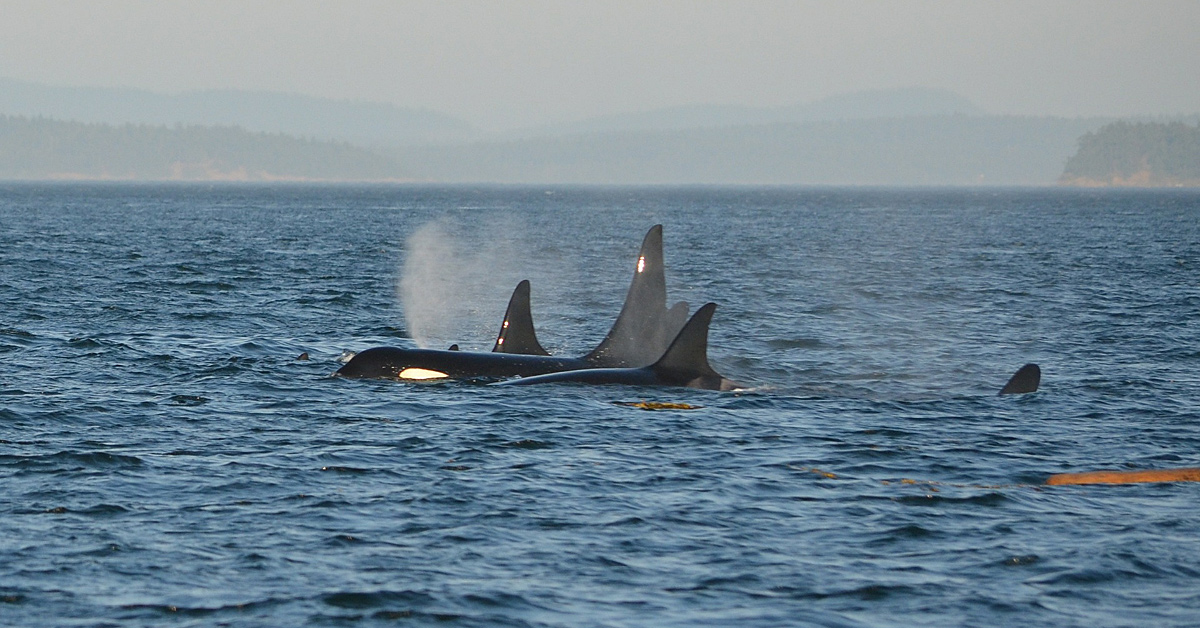 Our Hearts Are Breaking

The majestic Southern Resident Orcas were once a common sight in the waters of Puget Sound and the Salish Sea. Now, the remaining 75 killer whales are struggling to survive.

Citizens of the Ebey’s Reserve (“COER”) has been fighting the Navy to protect the sensitive environments of Central Whidbey and the whole of the Salish Sea region from Growler jet noise and pollution. We suspected that the endangered Southern Resident Orcas might be impacted by jet noise, but couldn’t prove it scientifically. Until now! Recent independent, peer-reviewed scientific research indicates that Growler jet noise penetrates the air/water barrier down to depths of at least one hundred feet (30 meters) at decibel levels that clearly impact orcas, other sea mammals and marine life. See this waterbreaking scientific report on COER’s website here.

The Navy’s only response: the study was limited and the test hydrophones were located directly off the runway at Ault Field. Of course, the Navy fails to state that the hydrophone locations were chosen with Navy input and consultation. It’s clear the Navy doesn’t like the results of this study.

Certainly more research is needed and that’s why COER has advised the Navy of our intention to file suit under the Endangered Species Act unless the Navy reopens consultations to examine Growler noise impacts on all endangered marine species. We hope the Navy will take its responsibilities seriously and study this issue, but we are once again prepared to sue the Navy if they won’t.

Advocates of unrestricted Navy activity argue that other noise generators and other environmental factors are much more damaging to the Orcas survival than sporadic jet noise. On its face that sounds reasonable. Until you consider just how dire the situation for the Orcas has become.

Our hearts are broken after reading a story by Catherine DeNardo published in the February 3, 2021 edition of Outside magazine. The story focuses upon Ken Balcomb, the founder of the Center for Whale Research, who for years has studied the Southern Resident Orcas, and upon the tragic death of L112 a two-year old female, detailing just how close we are to the point of no return for saving the Southern Resident Orcas. If there is any hope of helping these iconic creatures survive, all impediments must be scaled back, including jet noise. And the jets are not the Navy’s only deadly impact upon these creatures.

The National Marine Fisheries Service recently approved 7 years of Navy training activities along the Pacific Coast. The action area includes the Southern Residents’ critical inshore habitat of Washington State. The activities permit the Navy to harm, harass, or kill up to 51 of the Southern Resident Orcas though only about 75 individuals survive.

Ken Balcomb talks about once having seen a pod of 87 orcas pass by him; today you are lucky to see one. We have hunted them, trapped them, and now are starving, bombing and poisoning them into extinction. Is this really how we want to be remembered?

Everyone concerned about the Southern Resident Orcas must read this article. Then consider how you can help.

In compliance with the provisions of the Endangered Species Act (“ESA”), COER formally submitted its 60 day notice to the Navy, the National Marine Fisheries Service, and the U.S. Fish and Wildlife Service of our intention to sue for failing to consider underwater Growler noise in the EISs. Unless consultations are reopened beforehand COER will be able to file suit under the ESA after April 10, 2021.

COER’s attorneys, along with Washington’s Attorney General, are already briefing our National Environmental Policy Act (“NEPA”) case against the Navy over the Growler Expansion EIS. Plaintiffs’ initial briefs in that case are due March 28th. Pleadings between the parties are expected to go back and forth for several months after that.

We need your help if we are going to be able to also file suit under the ESA. We cannot do this alone. Please consider making a tax deductible donation, however large or small, today.
Checks to COER Charitable can be mailed to: P.O. Box 202, Coupeville, WA 98239 or you can donate at https://citizensofebeysreserve.com/donate/

People power, and donations from folks just like you, can make a difference. The fate of the Southern Resident Orcas hangs in the balance.

Help save whales and endangered species from being lost forever! Thank you.

More and more people and organizations are becoming aware that the Navy has been,...