(IATA: NUW, ICAO: KNUW, FAA LID: NUW) is a naval air station located in two sections near Oak Harbor, on Whidbey Island, Washington. It was commissioned as an active U.S. Navy installation on 21 September 1942. The main portion of the base is called Ault Field in memory of Commander William B. Ault, who was listed ‘missing in action’ during the Battle of the Coral Sea(1942). Ault Field is located approximately three miles north of Oak Harbor.

The other section of the air station is known as the Seaplane Base. Originally home to PBY Catalina flying boats, the air station’s main Navy Exchange and DeCA Commissary are located here, as is most of the Navy housing on the island.

On January 17, 1941, almost 11 months before the U.S. entered World War II, the Office of the Chief of Naval Operations asked the Commandant of the 13th Naval District to find a location for the re-arming and refueling of Navy patrol planes. Lake Ozette, Indian Island, Keystone Harbor, Penn Cove and Oak Harborwere considered and later rejected because of mountainous terrain, bluff shore front, inaccessibility, absence of sufficient beaches and lee shores.

But within 10 days, the commanding officer of Naval Air Station Seattle (NAS Seattle) recommended the site of Saratoga Passage on the shores of Crescent Harbor and Forbes Point as a base suitable for seaplane takeoffs and landings under instrument conditions. A narrow strip of land tied Oak Harbor to what is now Maylor’s Point Capehart Housing. Dredging, filling, and running water and power lines to the city was under way when at the end of November came the word to find a land plane site.

On September 21, 1942, U.S. Naval Air Station Whidbey Island was duly commissioned. Following the recommendation of the Interdepartmental Air Traffic Control Board, an area 2½ miles southeast of Coupeville was approved as an auxiliary field to serve NAS Seattle. Survey work began in February 1943, and work started in March. Outlying Field (OLF) Coupeville was in use by September.

At Ault Field, the earliest squadrons of aircraft were F4F Wildcats, which came aboard in 1942, followed by F6F Hellcats. Later that year, PV-1 Venturas arrived for training. In 1944, SBD Dauntless dive-bombers became the predominant aircraft at Ault Field.

After Word War II ended, operations slowed at war’s end and it was almost certain that NAS Whidbey Island would be earmarked for decommissioning. Many naval air stations across the United States were closing because they couldn’t meet the requirements of the post-war Naval Aviation; 6,000-foot runways were now the minimum standard and approach paths had to be suitable for radar-controlled approaches in any weather.

Taken out of reduced operating status, NAS Whidbey had a new lease on life and expansion and construction accelerated with the Korean War. P2V Neptune patrol bombers, which arrived in the late 1940s, would eventually make up six patrol squadrons at NAS Whidbey.

During the Korean War, patrol plane activity was stepped up again with several Naval Air Reserve units being called up and redesignated as active duty squadrons. By the end of the war, there were six VP (Patrol) squadrons and two Fleet Air Support squadrons based at Whidbey. In 1955, VP-29 returned from deployment to the Pacific and was redesignated as Heavy Attack Squadron Two (VAH-2), the first heavy attack squadron on the West Coast, the “heavy” designation reflecting its concentration on nuclear weapons delivery. Later that year, it moved to NAS North Island in San Diego in order to transition to the A-3D Skywarrior.

In 1958, the Heavy Attack Squadron Six(VAH-6) Fleurs, moved from NAS Moffett Field, California, where they had been the Navy’s second nuclear attack squadron. In September 1965 VAH-6 transferred to NAS Sanford, Florida, commencing the squadron’s transition to the A-5 Vigilante.

Then in the 1970s and beyond, 16 A-6 Intruder squadrons were based at NAS Whidbey Island. Whidbey was now the West Coast training and operations center for these all-weather, medium-attack bomber squadrons. NAS Whidbey Island now supports almost all of the U.S. Navy’s Prowler squadrons. In July 2009, VAQ-129 accepted its first EA-18G Growler aircraft which will eventually replace all EA-6B Prowlers in the U.S. Navy’s inventory. 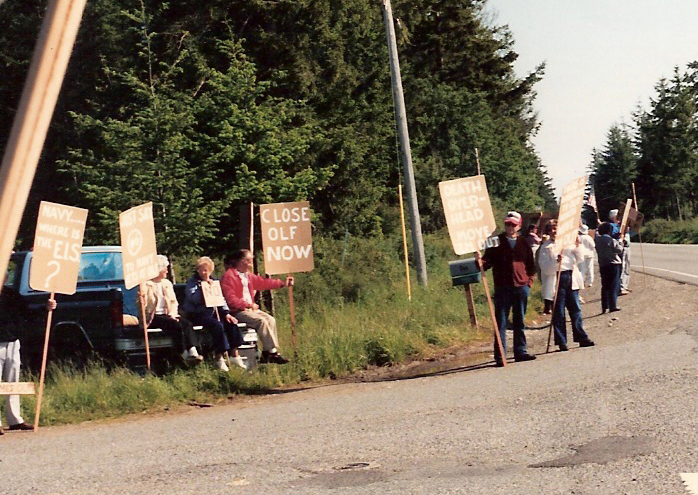 In the late 1980’s, WISE, Whidbey Islanders for a Sound Environment, worked to get the Navy to reduce flight noise. The community worked out an informal agreement with the Navy that the training flights would go no later than 10:30 p.m., would not last more than two days in a row, and that the jets would not fly on weekends.

Around 2008, the relatively fewer flight schedules began to increase, and after 9/11 the informal community agreement became a distant memory. Currently, the flights occur any number of days during the workweek until well after midnight, and this time, the planes are louder than they were in the 1980’s. The flights at the OLF have increased from 3,200 in 2010 to 13,300 in 2012 and are likely to further increase with additions of new squadrons.

In July 2013, NASWI suspended the OLF Coupeville practices until the end of 2013 in response to a lawsuit filed by Citizens of the Ebey’s Reserve. What comes next? That will depend upon the continuing efforts and determination of the community.