Additional hazards that are associated with the presence of the EA18G Growlers include:

Accident Protection Zones (APZs) protect civilians from military crashes. But what if the aircraft landing and taking off has a poor safety record?

The Growler is constructed on the F-18 airframe, as are a number of specialized variants, like the Hornet. They differ only in the type of specialized equipment. The F-18, which includes Growlers, is one of the most accident-prone military jet airframes in history. Military jets as a whole are 67 times more likely to crash than are passenger jets, so Growlers are multiples higher. Freedom of Information Act data from Department of Defense (DOD) reveals that between 1980 and 2014 the F-18 sustained 39 incidents, while its predecessor, the EA-6B (Prowler), sustained just 7 incidents. The F-18 airframe is 5.5 times more likely to sustain an incident than the Prowler.

Another credible, independent analysis states, “Growler jets are much more difficult to fly and not made as well as the older Prowler jets,” which is why their research found the Growler to be 10–36 times more likely to crash than the Prowler.

In 2015–2017 there were 13 crashes alone of the F-18, not including other class-A mishaps (that is, serious incidents).  This documents one such crash: https://youtube.com/watch?v=iR_PcZPy-6g

Exacerbating the safety concerns, the Growler pilots have been experiencing major hypoxic symptoms while flying, causing a variety of risk situations and emergency landings. The Navy has been unable to identify and fix the recurrent problem with the cockpit oxygen supply. Since 2015 the Navy has been trying to find and fix the causes of the “extremely worrisome cockpit breathing issues in the jets.” http://www.defense-aerospace.com/articles-view/release/3/172468/us-navy-investigates-12_fold-increase-in-f_18-hypoxia-cases.html. That post goes on to explain:

To date (Aug. 2018) the problem remains unresolved, and is a clear and present danger for pilots and anyone in harm’s way.

What is an FCLP?

Flight carrier landing practice, referred to as FCLP, teaches Growler pilots how to land on an aircraft carrier. This is how it works:

Figure 1 – Navy’s schematic of Path 14 FCLP at OLFC. Note, the above ground level (AGL) elevations for Path 32 will be slightly different than those for Path 14 because of topographic difference in the terrain (Source: http://admiralscove.org/naswiolf.htm ).

The odds of an aviation mishap are most acute during landing and takeoff. Basically, that is all FCLPs are: iterative landings and takeoffs. Obviously the more times jets land or take off in a given area, the greater the risks become for the properties under and near that landing/takeoff path. The Growler’s safety record, as discussed above, only exacerbates the risks, not to mention that many pilots are Growler-learning students.

What is an APZ?

Because of crash risks, the military has established “accident potential zones” (APZs) extending out beyond a mile from the ends of runways. The APZ is supposed to restrict civilian presence and use in order to minimize property damage and loss of life should an incident occur during landing or takeoff.

That works well when APZs are set prior to development. It fails badly when APZs are imposed after development has already occurred. That failure is “reverse encroachment.” That is, the military encroaches on and basically overrides civilian rights, thereby violating the 3rd and 5th Amendments of the Constitution, and in many cases there is an illegal taking of the 500 feet of airspace owned by individual property owners.

Under the Navy’s Air Installation and Compatible Use Zone (AICUZ) program, APZ’s are to be instituted wherever the number of FCLP operations exceed 5,000 at a given end of a runway. At OLFC that 5000-operation threshold would be exceeded for Path 32 under the Navy’s preferred alternative 2A as adopted in the Secretary of the Navy March 2019 Record of Decision. That alternative allocates 80% of the planned 29,600 Growlers FCLPs to OLFC and 20% to Ault Field.

Table 1. —Navy’s Preferred Option (Alternative 2, Scenario A):  Under this scenario, 80% of the total field carrier landing practices (FCLPs) would take place at Outlying Field Coupeville, for a total of 23,700 total FCLP operations. Runway (Path 32) would require APZs at each end of the runway because it exceeds the 5,000 operations APZ threshold by 3295 operations (66%).

aThis is a 4-fold increase in operations flown over the past 20 years and enshrined in the 2005 AICUZ.

Figure 2 shows the projected APZs the Navy presented in its draft EIS. Path 14 is depicted on the right and Path 32 on the left. Under the Navy’ preferred option Path 32 would require an APZ throughout its entire loop, whereas Path 14 would be below the 5000 operations threshold.

What APZs could mean to central Whidbey residents

If APZs are designated similar to those in Oak Harbor, the economic effects would be significant:

There are nearly 100 different land uses that would be constrained under Island County’s existing APZ ordinance (17.03.180). Some of the most relevant:

Island County does not have jurisdiction over the APZ location, size, or shape, which is set by the Navy. While Island County did adopt the Navy’s AICUZ recommendations for APZs in Oak Harbor (Ault Field), it did not have to do so, and it does not have to adopt the APZs for the OLF. Consequently, COER is concerned that the establishment of APZs at the OLF would cripple the affected area. In addition, were APZs established it would only serve to lock in the Navy’s self-proclaimed dubious grandfather rights to OLF and open the door to further operational expansion.

At present the County has not taken a stance on APZs for OLF Path 32 (Path 14 is under the 5000 operations threshold). Their current thinking is reflected in an official Island County OLF Q&A as excerpted here:

“If the County chooses to make adjustments to local land use regulations as recommended by the Navy’s AICUZ study, future development would have to conform to the new standards. Since, the area located under the proposed APZ is in the rural area, the County does not expect having to make dramatic changes to land use regulations governing the area. For example, multi-family residential, and commercial retail are not currently permitted in that area. Under the preferred alternative APZ boundary, the predominant zoning districts are Rural, Rural Agriculture and Commercial Agriculture. The County will have to discuss whether to restrict new development of uses that involve large gatherings of people, such as community halls, or country inns. Existing, neighborhoods that have already been developed at higher densities than what is recommended in the study would be considered existing uses.”

That seems to say, the County may promulgate APZs on path 32, but condition the regulations so as effect a minimal to negligible impact on development… like perhaps allow lots in Admirals Cove to still be built on because all of Admirals Cove would be considered as “a preexisting condition.”

While the County may elect to not adopt the Navy’s APZ recommendation, an undesignated APZ will still have the same mishap risks as a designated APZ.  Even if APZs are not officially designated, the Navy operations at the OLF put Coupeville’s high/middle schools and an adjacent daycare center in the invisible-APZ area, exposing the youths to the same high risk as would a visibly designated APZ. Note, the Virginia Beach crash was at the edge of the APZ-2 zone.

Those facts, and the understanding that APZs could be designated at any time in the future, will surely become common knowledge and understood by those considering property investments in Coupeville. So even if APZs are not designated the practice operations at the OLF will create real estate drag and related economic damages to central Whidbey. 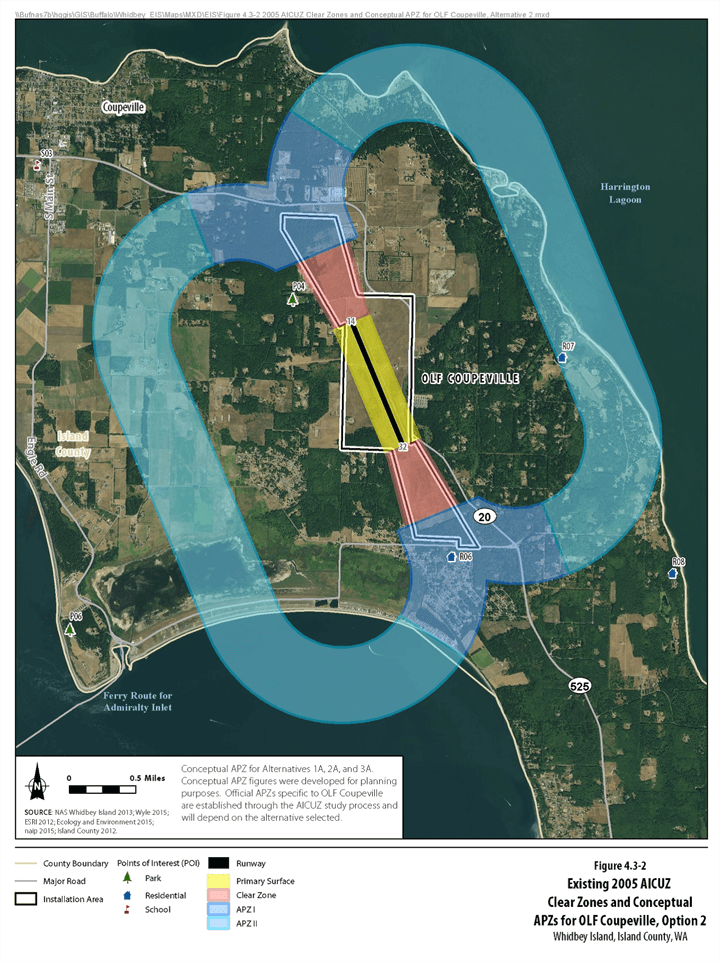 “Single-Site” refers to a situation where a branch of our military keeps all of a particular kind of asset in one place. This is generally considered unwise, because sabotage or lack of access to that site in times of crisis means that every military tool of that type goes ‘offline’. Single siting of any military function is a violation of the Technical Joint Cross Service Group (TJCSG) guidelines.

NAS Whidbey is located on a vulnerable island accessed only by two ferries (which are considered a high risk for terrorist attack), and an old, long narrow bridge that would be very easy to disrupt.

In terms of military security and readiness, the plan to bring even more Growlers to NASWI without branching out to other sites (as the Draft EIS outlines as the current Navy design) is a critical mistake.

Quiet: A Soldier’s Fight for the Most Silent Place in America